So today was my first day in service with the English congregation, and I was anxious to get out in the ministry. However, not necessarily anxious to be out in English. Why? I don’t know I think honestly it’s an adjustment to be in English, it’s been over ten years since I moved completely to French. I feel a little guilty. Maybe because its so easy or it feels like I’m not having to put forth a lot of effort or maybe I was over thinking things.
I really just wanted to observe things, you know how the territory is worked, who make up the territory etc… We are told there’s a great need but the numbers in the hall are quite good, pretty average. So in my mind I’m comparing to the french group and I think the need isn’t as great as they think…but I don’t know I’m new…so observe was the plan.
I got to the service meeting a little late and it had already started. During the service meeting I got my first clue of what may be an area of need. The meeting was very somber and a bit negative…I got the feeling that maybe the friends are a bit discouraged. This feeling grew as I got to know my service group better. There have been a lot of changes in the hall especially because of the economic crises that spain has experienced. Being a congregation of mostly immigrants has meant that many have moved because of a lack of work. The congregation just reflects what is happening in the territory, so the territory has become more challenging as people are often on the move. So this in addition to having a large territory with lots of walking causes some unique challenges.
Another couple have also just moved in the hall and were assigned from the couples school. It’ll be interesting to get their perspective on what the needs are. But we are here so we’ll figure out how we can help and do our best.
We plan to support the French group on their big service day and meeting on Saturdays. It works out great since there are no service arrangements on Saturdays in the English.

So on another note: the pintxos here are great! Bilbao is known for them…basically small bites or small tapas. They can be quite creative and the most popular area to have them, Casco Viejo, is a five minute walk from our place:) here are a few pictures… 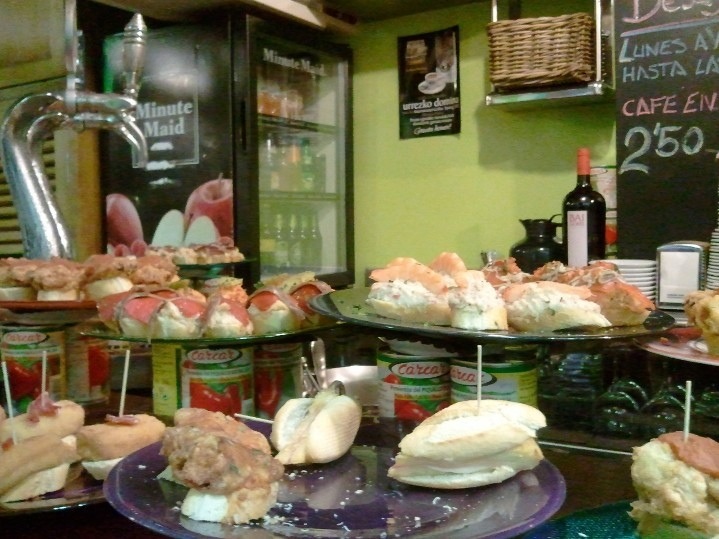 Celebrating ONE YEAR in Spain!